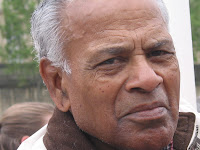 My grandfather died this morning around five thirty a.m. after surviving for two days without life support (he was expected to survive for mere hours). He was the most selfless man, always caring about everyone else even if he was suffering. Through the last one and a half years of his life, he suffered of kidney failure, yet he was always so kind and generous, wanting to help, and making sure that my sister and I -- and the rest of the family -- were always okay.
He has lived with my sister and me for every day of our lives except for a span of about seven months. It was such a long time, but I am so grateful for every moment of it -- he was the greatest grandfather anyone could hope for. He was always worrying about us two, feeding us, taking us on walks...I have such good memories of him playing with us and being the most patient man in the world. As everyone does when a loved one dies, I wish he had stayed around longer, had not been plagued by the failure of one of the most valuable organs (he had never been to a doctor before his kidney failed), and had continued to be the amazing, brilliant person he was for so much longer.
But when anyone comes into this world, we know that person must die eventually. I just wish that the time for my grandfather hadn't come so soon; but I know it wasn't in my hands, and though his death feels like a huge gaping hole in the house, I'm glad I spent more time with him the last month or so of his life and that his endless suffering is finally over. Near the end of his life he had been begging God to let him go; I'm also glad that his wish has finally come true, and that he got to fill himself on happiness, sunshine, and sweets during his last days (he had a blast despite his chronic pains). He's gone now and the only thing we can do is move forward, holding him dear to our hearts like we have always done.

in loving memory of
K.A. Ramamurty
February 10, 1928 - May 7, 2009
He was larger-than-life and I am extremely blessed to have gotten to know him and spend time with him and have him as my grandfather.

oh, maya. i am so sorry for your loss. i too was very close to my grandfather and up to this day, my heart still aches when i think of him. you are so lucky you got to spend those precious time with him before he passed on.

I'm so sorry, Maya. My granddad passed away a few weeks ago and I know exactly how you feel. *hugs* It sounds like he was an amazing man.

*hugs*
praying for all of you. xoxo

Maya, I can understand your feelings.
cos really we also miss him a lot. we used to admire him a lot for his alertness, caring, punctuality,etc. It is indeed a great loss for each one in our family. we still cherish the memory we traveled with him to Govindhapuram (South India) and temples around 2 years back. It was a fantastic journey!
Such a wonderful father, grandfather, brother, uncle and above all a wonderful GEM amidst us. irreparable loss:(

So very sorry ... thinking of you and Priya and your entire family at this sad time.

I'm sorry to hear this -- what a sweet tribute and how great to have so many memories with him to hang on to.

Sorry to hear....i never got to know my grandpa too much..I was 10 when he died....he spoke mostly russian which i could not understand....now Im a grandfather of 5...they are 3 hours away but try to hbe around them as much as possible and give them my silliness...their silliness and love and mine in exchange....anwayays nothing lasts forever... 2 years ago a dear friend of ours passed away from cancer...and within 1 hour my youngest daughter gave birth...one left..one entered....sure put it all in perspective for all of us...Im sure when my time is up some sweet lil thing will take my place...so take care

Thinking of you, Maya.

Thank you all for the sweet hugs and kind thoughts. It means so much.

an endearing tribute. I am also one of those fortunate people in this world who knew your Grandfather and drew a lot of inspiration from him way back in the 80's when your mum and i were in college. i cannot believe the news. however your tribute makes him still so alive and amongst us. May God bless u dear and give yourfamily all the strength to cope. i truly understand how it is having lost my only brother. must admit that your tribute shows a lot of maturiy too. lots of luv akila