Q & A with Beth Kephart, Author of "Undercover" 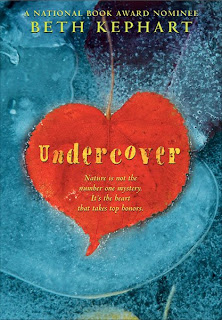 Ever since I read House of Dance, I've gained even more respect for Beth Kephart, a fantastic woman who's the author of the popular Undercover (which will be re-released with "extras" in May), A Slant of Sun: One Child's Courage (which was named a National Book Award finalist), Nothing but Ghosts, forthcoming from HarperTeen in June, and many others.

I wanted to learn more about her as I'm captivated by her blog, Beth Kephart Books, and her writing. Her words are beautiful and touching, and I admire her refreshingly honest and provocative observations -- the little things brought to light in a manner that makes you say, "Ah! That's perfect." (Which I've done countless times.)

I bring to you, now, Beth's own words.

1. You've stated that House of Dance was written during a difficult time in your life. How did you decide to write about dancing?

I couldn’t help myself. I’ve always danced. As a skater, as a lonesome teen in my parents’ basement, in jazz classes taken while at college. Three years ago my husband and I began taking ballroom dance lessons, which is a whole lot harder than it looks. What fascinated me most was the nature of the community that grew up within that studio, the courage dancers must have, the dreams that float them. Dancing can cut and wound. It can also heal. I was interested in how that healing might work for a granddaughter and her dying grandfather, and so dance became integral to the story I was writing.

2. According to your blog, Nothing but Ghosts features "a rising high school senior, a missing mother, a mysterious recluse, an obtuse painting, and a fabulous librarian." What was the inspiration for NBG?

The inspiration, oddly enough, was the goldfinch that came knocking on my office window shortly after my mother passed away. It would tap and tap and tap and hang there, like a hummingbird, forcing me to notice. I began to think that my mother’s spirit was somehow within that finch, and so I began to write a story about a girl who had recently lost her mother and who needed to find faith in living forward. A family painting plays a large role in the novel. So does the internationally renowned pleasure garden, Chanticleer, which sits down the road and was the setting for my fifth memoir, Ghosts in the Garden.

3. You were named a National Book Award finalist for A Slant of Sun. What was your reaction when you found out?

Ah, well. That’s an odd story, actually. I was in London at the time for the wedding of my brother-in-law. When my husband, son, and I returned to the hotel room at 1 in the morning there were all these notes stuffed under the door. My agent. My editor. Multiple notes from both. “Call me,” is all the notes said. “I don’t care what time it is, call me.”

I was hugely confused. I hadn’t told either that I’d even be in London. And if they somehow knew I was in London, how did they know which hotel? I’d also just had a small little problem in the subways of London (That is: We were running for the last underground train, the doors were being locked behind us, I was in high heels, and I had no money with me. My husband and son were far ahead and I was sure I was going to have to spend the night asleep in the station. I was having, in short, an anxiety attack.). So by the time I got these messages, I was more flustered by anything else.

I also could not for the life of me (in my muddled state) do the math and figure out what time it was in California, where my agent lives.

By the time I actually talked to my agent I was stunned. And even more deeply confused. I published SLANT for one reason only—to tell my son how much I loved him, how much he’d taught me. There had been no press about the book. I hadn’t been on any speaking tours. How in the world, I kept thinking, did anyone even know that it existed?

4. Undercover has received so many accolades, and it was also named a readergirlz recommended read for March. When you first wrote it, what were your expectations? Did you ever expect it to be so popular?

Oh, Maya. What is popular, I wonder? UNDERCOVER has its dear, fervent following, and I am so hugely grateful for that. But certainly it doesn’t have the commercial pull of a Twilight or Gossip Girls series. I am thankful that critics saw in it what I hoped they would see and more appreciative than I can say of those who have reached out to tell me how the book affected them. I am hopeful that more will want to join Elisa in her journey when the paperback is released in May; the paperback has “extras” that include a short book of new poems penned by Elisa.

5. What advice would you offer to aspiring writers?

Don’t give up. I’ve worked on books for years and years and years—dozens of drafts, sometimes. Then I’ve put them away. And then I wait. And then I figure something out, and the book comes alive. This is the case for something I’m working on now, a novel in progress that takes place in Seville. I wrote 80 drafts of that book, five years ago. Only now have I figured out what the story must be.

Thank you so much, Beth!

I'm so privileged to be here!

And look! A photo!

Right back at you, Maya.

I can't wait for Nothing But Ghosts and more of Beth Kephart's irresistible writing :)

Great questions! I love Beth's reaction to finding out she was a National Book Award finalist.

And NBG is fantastic!

Thank You, Maya, for such a nice interview.

I loved how each question prompted a story.

Beth's everywhere lately. I can't keep up. But I'm so glad. Everyone needs to have the privilege of knowing about her blog and books. I've read four of her books, since finding her not even a handful of months ago, and I don't want to run out of them. Really looking forward to the new Undercover paperback and Nothing But Ghosts these next few month!

What a wonderful interview! Your questions were exactly right, and provided an opportunity for us to learn more about Beth and her writing.

Thanks to both of you :)

I love hearing award stories from authors. They are always good.

I have House of Dance on my dresser right now...

Thank you all for being here and reading!